My family and I were driving back from our vacation in Missouri. On our way back we were going to pick up a five-month-old puppy named Glacier. Unfortunately we didn’t like his name, so we tried to come up with a better name–Savannah, Gizmo, Marshmallow and Snowball were options. But we wanted a name from his Cuban heritage, so we narrowed it down to Savannah, Gizmo and Melo (short for “milagro” which means “miracle” in Spanish). We still couldn’t agree.

We pulled into the driveway of a ranch style house with three dog cages lining the small fence around the house. Each cage was big enough to hold two horses but instead held at least 20 dogs each.

I jumped out of the car and skipped past my family. I started hopping up and down on the gravel like a toddler with a sugar rush. A middle-aged woman waved and grinned at us.

As the rest of my family approached her, I started sneezing like I was allergic to everything there. Than I realized that I was–hay, grass, mold, dust and unfortunately dogs. Luckily Glacier was hypoallergenic.

As the woman talked with my parents about caretaking, my brother Trey and I went exploring. We glanced at all the dogs in the large crates and let them lick us, although they slobbered all over us.

A lush, green forest seemed to consume the house, shading the area. There wasn’t much of a breeze. A layer of autumn leaves covered much of the gravel.

As I was about to climb into the greenery, my mom called me to the garage. I was just in time to see the woman glide out the front door with a little white bundle in her arms. This was Glacier.

I wanted to shoot out like a bullet and snatch him up, but the hush that fell over everything stopped me. My mom and dad each took a turn to hold him.

When it was my turn to cuddle him, I gazed into curious black eyes and knew he was 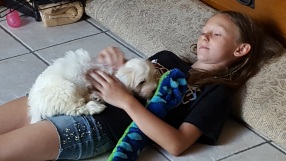 perfect for us. He was so soft, like a newborn lamb. I let his sandpaper tongue brush against my cheek. As I stared lovingly into his eyes, I sneezed right in his face. He closed his little black eyes tightly and started licking my face furiously, almost as if he were sorry for me. But I was sorry for him. I pitied him for a second reason–he stank badly, like fresh manure. Even so, I loved him like nothing else.

I gently passed him to my brother, not wanting to let go. But as the soft folds of his fur left 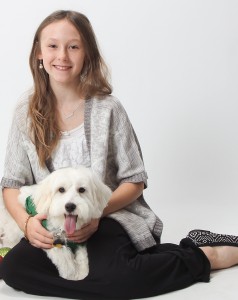 my fingertips, I whispered in a hoarse voice, “He looks like a Melo.” All of a sudden the bugs, dogs and even the wind spoke up, whistling through the trees. My family spoke too and they agreed.

“That sounds perfect,” my mom said. I nodded, “Just like him!”

Paige, 11, is going into 6th grade. She loves her puppy, Melo, and enjoys playing volleyball. Paige hopes to be a journalist when she grows up.